‘Aspire to inspire before you expire.’

What a great first day. It was hot; the sun shone; we got the all-camp picture taken; we started the Big Ten instructional program; we played Twilight League tonight, and the Canteen was opened after shower and dip. PHEW!! That’s a lot of stuff we accomplished.

We got out of Wasserman Hall at 9.40 where I thought the floor was going to break, such was the heaving mass of bodies in there jumping around and singing. With over 170 people in there for Song and Cheer night, the energy and temperature were at record levels. This is an enthusiastic crowd, that’s for sure.

We will get into our first full, proper day tomorrow with Big Ten instructional in the morning, and Leagues in the afternoon. The hope is that the boys – especially the younger boys – will learn how to throw and kick and run, slide and swim and climb in the morning, and then will be able to put those skills to good use in their leagues in the afternoon.

It’s hot, humid and energised up here, and all is well, so safely rest. 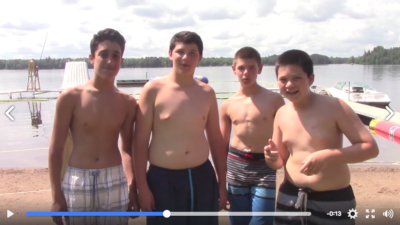