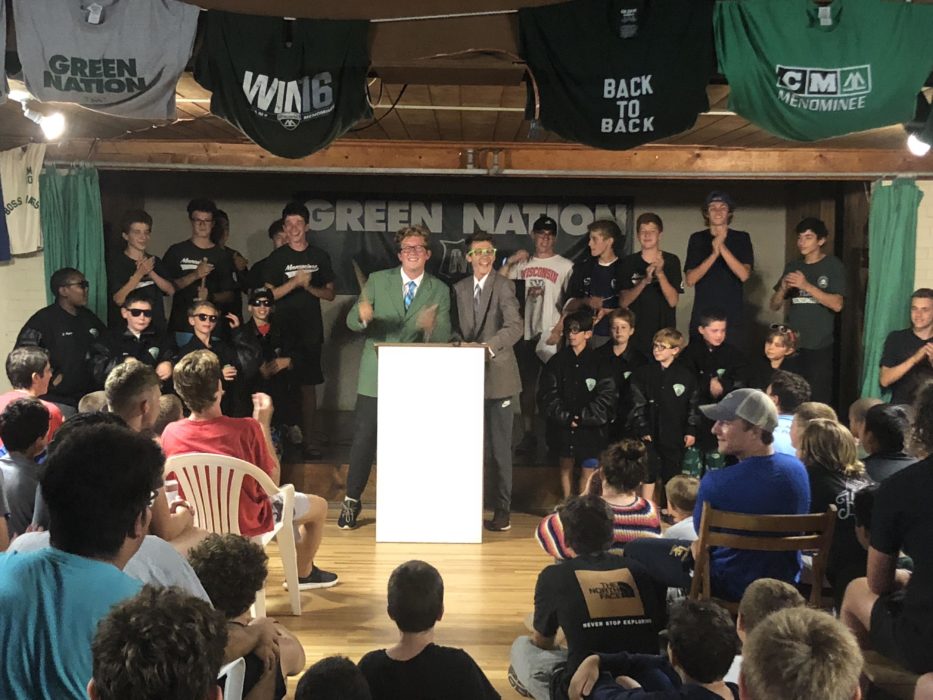 Wow it has been an incredible couple days of camp and with the help of the Weil brothers (Jackson and Ryan) we dive deep into all of it! We cover the entire second day of the Kawaga competition, and discuss the wins/losses, ups/downs and everything we could possibly think of that happened at Menominee and Kawaga. We also talk about this Lazy Day Friday at CM and break down the Camper-Counselor switch day debates that just ended in Wasserman Hall. This one is a MUST listen!

‘Don’t permit fear of failure prevent you from trying. We are all imperfect and we will all fail on occasion. Fear of failure might be the greatest failure of all’.     John Wooden.

I’m sure you have all got the result by now, and it was not the one we had hoped for, but it is what it is. Much like the Brexit shock of 2016 when the UK woke up to the stark realization that the people had voted out, so it was yesterday that by 6.30pm Kawaga had turned the competition around and for the first time in a long time had won overall. By that time, we still had 16A softball to play (which we duly won, by the way), but the damage had already been done and the 37-34 score-line in favour of Kawaga was a fair reflection of the two days’ play.

Going in 18-14 down at the start of the day, we knew we had a big fight on our hands, and so it proved. The 13 and under age group were dominant here at CM, and for once we were winning soccer games (my sport) that hitherto we would have lost. They also swept football, a rare event indeed. The 16s  and 11s had a battle royal over at Kawaga. They were taking a lot of ‘punches’ that they did not see coming, but they picked themselves up and made a real fight of it yesterday. At one point it was all tied up at 31 a piece, and the momentum was in our favour. But as  the day wore on, our luck ran out and maybe home-field advantage played a part as the competition slipped away from us.

But what a competition it was. I shall leave it to the Megaphone to fill in the details of each game, but please know that the boys played hard, they played fair and they played the Menominee way, each one of them proud to wear the green shirt on their back. When they play that well and carry themselves with such dignity and class, it is hard to criticize any of them. They played a tough opponent who had not won the competition for a number of years, and maybe their desire and their thirst to correct that was the trump card in their hand. Either way, a lot of our boys now know what it feels like to put so much effort into something and then come away empty handed. It hurts, but we can all learn from it, and we will.

We did not return to CM until after 9.30 last night, and we still had to have dinner! That might be the latest dinner we have ever had here. A BIG thank you to the kitchen staff for ‘playing’ with us and keeping the kitchen going so late. We are a team here, a family, and everybody has a part to play, and yesterday we all played it.

Today is going to be a Lazy Day kinda day. We are going to let the boys lie-in until 10.00 before we get going again. Beach party this afternoon? The competition might be over, but the summer most definitely is not. Green and White is just around the corner and could break out at any time.

So, despite the long day and the loss, all is well, so safely rest.

Goodnight and good day everybody.