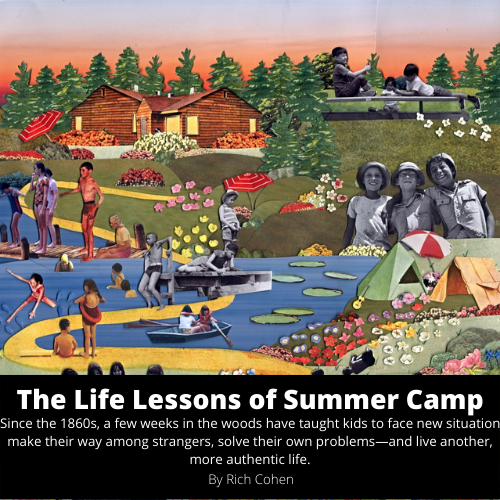 Check out this spectacular article by Camp Menominee alum and accomplished author Rich Cohen. Rich talks about his experience at Menominee and discusses the valuable life lessons learned at summer camps each year. It was featured today in the Wall Street Journal!! Here is the article in full that can also be found on the Wall Street Journal Website.

The Life Lessons of Summer Camp

Since the 1860s, a few weeks in the woods have taught kids to face new situations, make their way among strangers, solve their own problems—and live another, more authentic life.

From ages 6 to 12, I spent eight weeks every summer at Menominee, an all-boys camp in Eagle

River, Wis. I was taught archery at Menominee, how to shoot a rifle, roll a kayak, cross the lake on a single water ski, bus a table, operate a Lazy-susan, tell a ghost story, make a bed with hospital corners and mark a trail, but those are not the only things I learned. In the manner of a public school or army base, what I learned was usually not what was being taught. I learned how to form an alliance, survive a bully, win a fight against a stronger person, spark a softball rally, sneak off the grounds and into Eagle River taverns without leaving a trace, gamble, chew tobacco, throw a knife, dismember a daddy long legs, barter and bluff.

Those who spent summers there come from towns across the country and world, but we all grew up at Menominee. We loved it, and that’s why we cried at the banquet held the last night of every summer, tears streaming as we sang, “Fill a stein, sing a song, to the camp I love.” It’s why we did not merely try to defeat but to demolish the kids from our archrival, Kawaga, at the midseason Olympiad. Mike Dunleavy Jr., who went on to play basketball at Duke, had been a Menominee standout in those games. When a “kid from Menominee” introduced himself to Dunleavy on the floor amid the celebration that followed Duke’s 2000 NCAA championship, Dunleavy, turning serious, asked, “Did we beat Kawaga?”

I still know fellow campers by their nicknames: Zeke, Flea, Psycho. And they still know me by mine. When someone calls asking for “Rocket,” I know I will soon be talking to one of the few people in the world who really understands me.

Everything important I know, I learned at camp.

Though the seeds were planted by the Transcendentalists—Henry David Thoreau spent enough time in the woods to get himself a five-year jacket—the first American summer camp began as an act of wartime empathy. It happened in 1861, soon after the start of the Civil War. Frederick Gunn, the educator and abolitionist who ran the Gunnery, a boarding school in Washington, Conn., organized students into a kind of platoon. At the end of the spring semester, in an effort to show solidarity with the Union Army, they hiked 30 miles from campus to Welch’s Point in Milford, Conn., a crescent-shaped beach on the Long Island Sound, where they slept out and lived rough, fished, hunted, prayed. Ten or 15 New England boys telling ghost stories on a rocky shore beneath a starry sky—it was supposed to make them feel what the soldiers felt, make them suffer and understand. What they actually had was fun, and it’s a glee still detectable in the DNA of every successful summer camp. Getting away, getting lost in the woods, getting a taste of another, more authentic life—that’s camp.

Several of the students who bivouacked with Gunn in the early days—the spring hikes continued long after the surrender of Robert E. Lee—went on to found the first generation of summer camps, each organized in the spirit of the Gunnery. Only now, instead of several days on the Sound, it was eight or ten weeks in the forest, in tents or cabins, beside a lake in Massachusetts, New Hampshire or Maine, where campers were taught an ersatz pastiche of Native American culture, how to hike, cook on a fire, bead moccasins and belts, play baseball.

Keewaydin, a canoe camp “in the wilds of Maine,” was founded by Gunnery grad Gregg Clark in 1893—that was one of the first. Keewaydin, still going strong, has a powerful and loyal alumni. Michael Eisner’s book about Keewaydin and how it formed him carries a foreword by John McPhee, who says he grew up and learned to love nature at Keewaydin, which is, after all, the big mission of camp: to wean you from your parents amid a kingdom of kids.

Other early camps included Chocura on Squam Lake in New Hampshire (1881) and Atwater, an all-Black camp in North Brookfield, Mass. (1921). Girls’ camps began to open in the early 1900s. All told, there were around 100 American summer camps by the first decade of the 20th century. The stated purpose of camp had morphed by then—from empathy to character- building. The populace had become urban, soft. The life of a modern youth was a pale, cushy life. Summer camp was meant to rectify that, to remake the young people of Port Chester, N.Y. or Glencoe, Ill., in the image of their pioneering ancestors.

America had been a raw country, its western edge bounded by terra incognita, a mysterious wooded wilderness. The ability to throw it all over and light out for the Territory, to start again in back of the beyond, is what formed our national character. But the frontier officially closed in 1890. We’d hit the wall of the Pacific; the indolence and belly fat of old Europe awaited. The summer camp would cheat time. Such a camp, properly run, would be a pocket of frontier where the next generation would return, for eight weeks a summer, to a state of prelapsarian grace.

For the immigrants who poured into America between 1900 and 1920, most of them from Eastern and Southern Europe, the logic of camp was less mystical. The cities, where the majority lived, were swept by sprues and fevers in the fetid summers before antibiotics and polio vaccine. To parents, camp was therefore less about Frederick Gunn and frontier skills than about clean water and fresh air. This is when the YMCA, which had been running camps since the beginning, scaled up its operation, when the Fresh Air Fund began its work in New York City, when every church and synagogue organized summer retreats, most modeled on older camps which had themselves been modeled on the philosophy of Gunn, whose spirit runs like a ribbon through every summer.

Gunn laid the cornerstone for an architecture that’s become familiar to millions: white cabins on a green hillside, the mess hall clatter and the bathhouse showers, sand and wet concrete, the infirmary, the canteen where candy is held in the way of the gold at Fort Knox, Reveille and Taps, the sound of a speed boat in the distance, the way the lake turns glassy black at the end of the day, smooth as a mirror, the rot in the woods, the smell of pine needles in the sun. There were 10,000 camps by 1970, and camp itself had become an institution, a way of life for many of us. It lives in our minds as a shared memory—a new kind of childhood.

My great-grandfather was conscripted by the Russian army and spent his summers on maneuvers in the Caucasus. My grandfather spent his summers on the docks, first in Antwerp, then in Brooklyn. My father spent his summers at Camp Ach Vach Ha on Neversink Mountain in upstate New York, where he claimed kids tried to escape at night and were caught by a searchlight clinging to the wire. I spent my summers at Menominee, which had been opened by a Chicago high-school football coach named Nate Wasserman in 1921. Most of the kids at my camp were Jewish, as were most of the kids at camps nearby, including Ojibwa and Nebagamon.

Church and YMCA camps were reasonably priced, but most good camps were expensive. When I heard what my parents paid for eight weeks in the North Woods—$1,500!—I spit my Frosted Flakes across the mess hall table. But, as far as most of us were concerned, what kids got in return was invaluable. There were all the advertised activities—water skiing, horseback riding, archery—but even better were the things that can never be described: the sense of remoteness

and freedom, of dwelling in a land beyond the jurisdiction of helicoptering parents, of being left to settle your own feuds, fight your own fights, solve your own problems. Independence. Becoming an adult. We made fun of it because it was the 1970s, and we pretended to be cynical and in disagreement with everything we were told, but it was true. If I’ve been able to face new situations, read hierarchies, make my way among strangers, if I’ve been able to adapt, credit my five years at Menominee.

When I returned to camp years later, this time in the role of parent, I found a world that was entirely the same and entirely different. The best camps have evolved to meet market conditions and customer needs, the consumer being the parents. Because the kids cried when the parents said it would be eight weeks away from home, and because the parents could not stand to hear their kids cry, and because the price of eight full weeks had become astronomical, sessions of six, four, two and even a single week were added—hardly enough time to get acclimated, let alone to be broken down and built back up.

And everything else had changed too. Start with the food. Whereas it had once been no more than serviceable, the mediocrity being the point, a way of saying you have entered a world where food is no more than fuel to let you do what has to be done, the meals at my son’s camp were good enough to email home about. Which he did! Which is another thing: Once upon a time, the goal of a camp director was to make you feel like you had dropped off the map and could only be reached by telegraph or pony express. Yes, there was a rotary phone in the office, but calls were allowed only in case of death. My son emailed twice a day from camp, which meant a constant stream of oversharing and resultant parental worrying.

Then came the photos, taken each day by counselors and loaded onto the cloud for parental perusal each night. Tug of War, swim relay, egg carry—kids chronicled in every state of play. And though you might be philosophically opposed to the practice, you find yourself studying the daily cache, parsing images like a Kremlinologist, reading the rise and fall of reputations in every gesture. The sun glances off a canteen and hits your kid in the eye. He winces, and, as he winces, the image is taken, then uploaded, pushing you into a late-night tizzy.

In short, the contemporary parent is filled with worry and, to soothe that worry, has demanded a new kind of camp—wired, monitored, doctors in residence—remaking the Menominees and Ojibwas to function more like every other part of America. It’s not the closing of the frontier that marked the big change in American character; it was the allowing of kid-to-parent phone calls from camp.

—Mr. Cohen is the author, most recently, of “The Adventures of Herbie Cohen: World’s Greatest Negotiator.”

Appeared in the July 9, 2022, print edition as ‘The Life Lessons Of Summer Camp Summer Camp: The Enduring Frontier’.