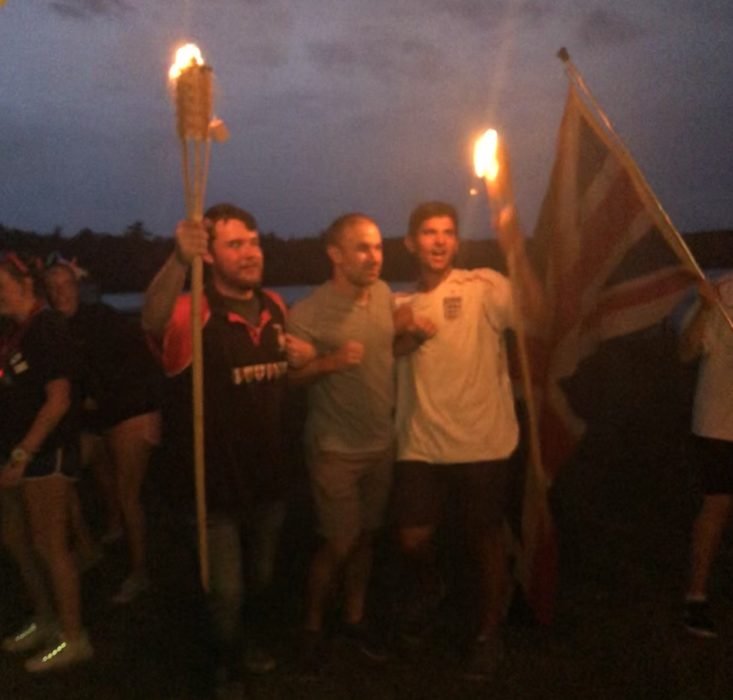 On this super special extra fantastic 4th and 5th of July episode I am joined by Simon Mann and Neo Schneider! We discuss the historic start to British & American that took place at Camp Marimeta during our social (the first time we have EVER done it off CM grounds), as well as our first day of B&A and our first intercamp competition of the summer with our friends from Camp Timberlane. Simon and Neo were great guests so enjoy.

PS – we completely forgot to shout out the counselor volleyball team! They continued their domination from last summer with a 2-1 victory against the boys camp from Minocqua this afternoon. That makes the staff undefeated in their last 5 sporting events dating back to last summer. Way to go guys!

Woody’s Word – Back Together

‘The richest people in the world are not those who have the most, but those who need the least’.

Forgive me for not writing last night, but we got back late from the fireworks at Camp Marimeta for Girls, and it was raining pretty good, too. The rain did stay off until the fireworks finished, so someone must like us. Maybe we just got lucky. Either way, it was a great evening.

We need the rain, believe it or not. The grass is browning up, so we’ll take some ‘liquid sunshine’. But that was all we got last night. Today it has been hot and sunny, which was kinda strange given that we had competition with Camp Timberlane this afternoon, and it is wont to rain when we play the boys from Woodruff. But not today. We got all the games in, and we came away 14-1 winners. The boys carried themselves and our good name well, and this gives us all hope for the next big competition against the boys from Minocqua later in the summer.

It’s at this time of year that we play British and American. It all kicked off at Marimeta last night, as the Brits interrupted the fireworks and tried to take over the camp. The ‘rebellion’ was short-lived, though, as the American counsellors rode to the rescue, and the rebels were beaten back. B and A got properly underway this morning with the Captain’s Duels. Each age group captain fought their counterpart with a water-filled balloon, and the one who got the wettest was defeated. It was nip and tuck all the way to the end, before the Brits came good with the final balloon. And so we move on to a couple of days of B and A with the camp favourite  – the Squirt Gun Fight – taking place tomorrow morning.

We talked about the trips this evening in Wasserman Hall. It sounds as if they all had a great time, wherever they went this week. They all came back, and all is well, so safely rest.