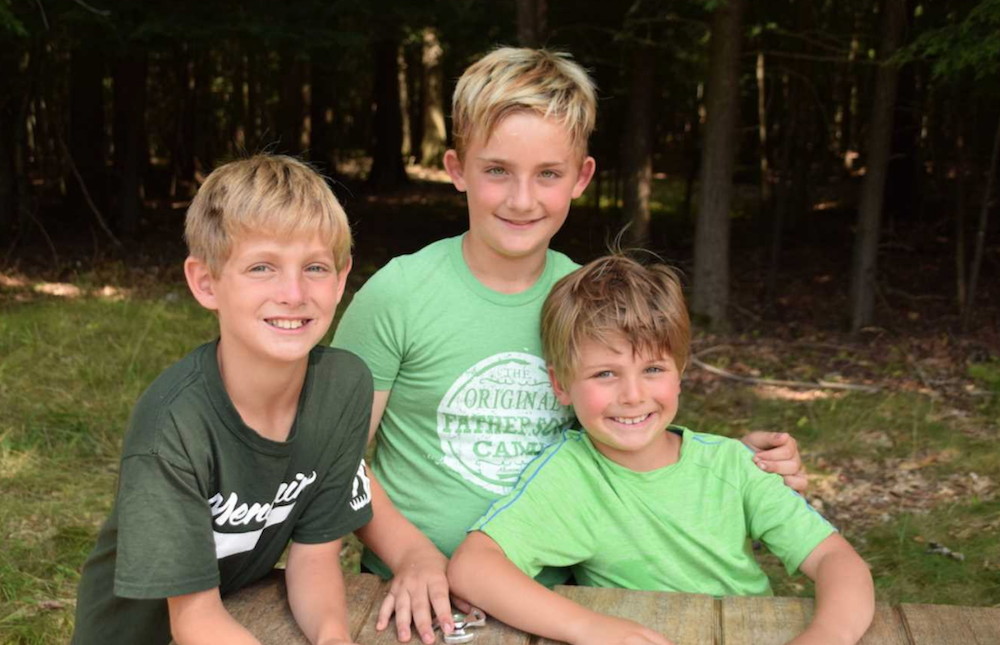 Good evening everybody! You are all in for a treat today, and I hope you are ready to be informed! This evening we are treating you with a double dose of The Word. On the pod tonight I am joined by Cabin 15 members Tobey Berks and Drew Benjamin to recap an action packed day of Green & White events, as well as talk about yesterday’s surprise Color War break. In addition, below you will find Woody’s eloquently written words of the day. We’ll continue to provide both each night for the rest of the summer. Enjoy!

For the Love of Camp – Jason

‘It doesn’t help to worry about what others think, as they will think it anyway’.  Anon.

The first full day of Green and White, and what a day! We kicked it off under a bright blue sky with Vroom. This might be one of the more complicated squirt-gun ‘fights’ we play, but it seems to be the one that the boys like the best. The essential idea is to collect flags that are hidden all over camp; and I mean all over camp. From the far end of the golf course to the eastern sandslide and all points in between, they are out there and they just have to located and retrieved, WITHOUT getting squirted. That is not so easy. But with the whole camp to play on and an hour in which to do it, everyone had a chance. And it was close! The Whites took this game – a big game to take – but there is a long way to go yet.

We had to have a General at the end of all that running around as it was getting real warm by the time we had finished. Jumping in the lake was encouraged. This afternoon we got into Runners and Chasers, one of my favourite games. I will not attempt to explain the rules here, but please believe me when I tell you that it is a lot of fun. It looks complicated to the unwitting spectator, but even the uninitiated are soon enthralled by the spectacular running, dodging and weaving of the athletes. The game is against the clock and it is the team that manages to stay alive the longest that wins. Once again it was the Whites who triumphed. They are off to a flyer!!

Another event came after dinner – State of the Union – another game of squirt guns, strategy and running. Who says these boys can only function with a smart phone in their hands. A plastic bottle with coloured dye in it is enough to have fun here. No electronics needed!! And we finished up with Mannequin Madness tonight, in Wasserman Hall. In this slower-paced event, the three respective age groups have to dress up a team mate in 5 minutes, on stage – one piece of clothing at time – and then pose them and explain the theme of the dress-up. Both this event and State of the Union went the way of the Greens, so it is now very close (3-2 Whites I believe) at this point of the competition.

We’ve only just begun, so who knows where this will all lead tomorrow. It’s exciting stuff indeed.

All day the sun shone, so mother nature played her part. When we weren’t in competition we were in the lake. This is almost the perfect camp day. We even managed to get the boys to bed reasonably early. Phew!

As I write this the Senior cabin are out across town with the girls from Camp Marimeta, our ‘sister’ camp. They will be back by midnight, by which time I plan to be fast asleep.

Life is good and all is well, so safely rest.

Check out some extra pictures from today: 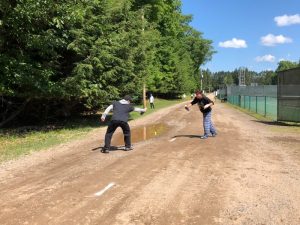 The boys chosen as the “Black Death” squirters in Green and White Vroom. 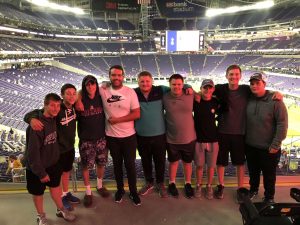 The CITs on their trip to Minneapolis checking out the Tottenham Hotspur FC game.